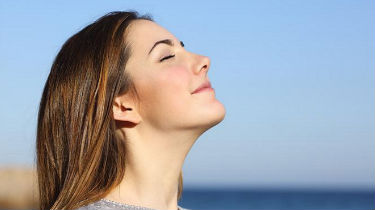 Oral Restrictions and Mouth Breathing – What’s the link, and why bother with nose breathing?

So one good reason to consider release of an oral restriction is to make it easier to breathe through the nose by encouraging better tongue posture, with the tongue sitting in the roof of the mouth at rest.

Why is nose breathing important?

Encouraging a normal volume of air to be breathed

Nose breathing usually results in breathing a Minute Volume of air which is closer to the physiological norm. Mouth breathers tend to breath too much air for their level of activity. We should normally breathe around 4-5 litres of air per minute at rest. Breathing a greater volume of air per minute at rest tends to lower the End Tidal Carbon Dioxide (ETCO2) level. Essentially this means we carry a smaller % of carbon dioxide (CO2) in our blood and our lungs.

Surprisingly, CO2 is not just a waste gas. It is essential that we retain a certain amount inside our blood in order for the body to work properly.

I’m going to try to explain in a nutshell why there is a huge reason to be concerned about low levels of CO2 in our blood and lungs…. And it is mostly to do with our ability to achieve good cellular oxygenation.

CO2 is a bronchodilator and vasodilator, and as such opens up air passages and blood vessels. This means normalising (increasing) CO2 levels can reduce blood pressure. It’s well documented that breathing dysfunction can be related to cardiovascular problems (1).

In addition, there is the Bohr Effect – so when CO2 is increased (normalised) by breathing a smaller (normal) volume of air, haemoglobin more readily releases oxygen (O2), and thus allows any cells which may be suffering from cellular hypoxia, to become better oxygenated.

Furthermore, we know that altering CO2 levels can help treat the common cold (2), as well as help reduce histamine release from mast cells and so potentially treat hay-fever (3).

It would seem that CO2 may be just as important for health as is O2.  It just seems to have gotten a bad press, perhaps due to its links with global warming and dirty power stations.

All cells need oxygen and when they get enough, they are less stressed and function better. Each cell type will respond in different ways to a lack of oxygen (stress) – so a mucous secreting cell may secrete more mucous, and congestion may result. Over time this can become chronic congestion. Over more time this inflammation may result in a nasal polyp, or enlarged adenoids and tonsils. The point is every cell needs oxygen or it becomes dysfunctional and stressed.

The symptoms of cellular hypoxia

The symptom of lack of oxygenation will differ according to:

(a): the individual’s genetic predisposition

e.g.: “the asthma gene” leads to a bronchospasm when the smooth muscle which usually keeps the airways open is not oxygenated (in addition to when there is low CO2  due the asthmatic’s breathing dysfunction).

(b): the type of cell that is suffering

e.g: a nerve cell suffering cellular hypoxia may respond with a symptom of numbness, peripheral neuropathy or tingling. Whereas a brain cell with insufficient oxygen will deliver a symptom of dizziness – just like when you blow balloons up too fast at a party. There’s plenty of O2 in the air you are breathing. It’s just that you are losing too much CO2 into the balloon and so the oxygen is not being effectively released from your haemoglobin (Bohr Effect as above)

There are many factors beyond the scope of this article which could affect the symptoms, but factors such as extended periods of time with lack of oxygen (chronic cellular hypoxia as opposed to acute cellular hypoxia) will play a role.

So how can a mouth breather become a nose breather?

The good news is that learning to breathe in a different way than your habitual norm, can improve ETCO2 levels, thus resulting in better cellular oxygenation. Therefore, inflammation may reduce and so chronic soft tissue obstruction, such as a persistent blocked nose, or enlarged tonsils may improve over time. It seems that whilst our breathing patterns can become habitually worse, they can also become habitually better, thanks to “respiratory neuroplasticity” (4).

It appears that the younger we are, the more sensitive we are to alterations in breathing patterns (5).

However, improvements in breathing patterns have been recorded across all age ranges, with many cases of reductions in many different symptoms being achieved during the use of a number of different breathing retraining techniques.

One of the more well known techniques is the Buteyko Institute Method (BIM), which focuses on normalising breathing patterns and has been shown to be effective for asthma and sleep apnoea, as well as a number of other symptoms (6-8).

After a typical BIM (5 day) breathing retraining course, the client is asked to undertake a series of exercises. Around 1 hour a day of practice (split up into 5 or 6 lots of 12 minutes) is required for anything between 1 month and 6 months. It takes time, but over time we can consciously make amazing changes to how we breathe, resulting in a better, more functional subconscious breathing pattern.

During these courses, there is more to do than simply learn to nose breathe. However, nose breathing is a key component and is seen as essential to improving health outcomes using breathing techniques.

Nose breathing also allows warming, filtering and humidifying of the air. In addition, the air has the chance to be mixed with nitric oxide formed in the sinuses when taken through the nose (9). Nitric oxide vasodilates and bronchodilates (opens up blood vessels and airways) as well as having potential other health benefits such as being bacteriocidal.

All in all breathing through the nose is good for you, and breathing through the mouth is definitely not in your best interests. If you suffer from poor sleep, congestion, low energy levels, asthma, snoring, or sleep apnoea, ensure that you contact your GP and consider enrolling on a Buteyko Institute Method course.

However, one of the best things you can do for your body is to encourage nose breathing while you sleep.

Use SleepYstrip to achieve this and breathe better while you sleep. Visit www.sleepystrip.com to find out more about this great product.

How big a problem is poor sleep?

Poor sleep is one of the biggest health crises of our time, with around 20% of some populations recording poor sleep quality (10) with other studies quoting over 50% of people having poor quality sleep (11). This may be related to modern lifestyles such as over-stimulation with caffeine, cigarette smoking and use of sleep medicine (11).

What methods are available to assist with sleeping problems?

Common approaches to reducing signs and symptoms of snoring and sleep apnoea include:

It is my hope that the future of treating sleeping disorders will involve at least in part, a focus on the following:

So to conclude. Why not consider assisting with normal breathing patterns, instead of simply forcing the airway open using machines and appliances?

When there is an absolute need to hold the airway open (with MAS or CPAP or surgery), because of a lack of time to go through breathing retraining (with BIM), or because of a failure of breathing retraining, then at the very least we should ensure that we have a closed mouth posture, and a tongue which is free to rest in its natural rest posture, so that we may breathe through the nose all night long.

The Tongue Tie Institute is the first dedicated Tongue Tie education organisation for health professionals in the world.

All transactions are verified by Paypal and secured with SSL security.